Perkalaba - not just a town in Carpathia, but also a band:

First of all one thing has to be mentioned, this band doesn`t pretend to be nuts, they are! That`s why they perform with a psychiatrist. Beside their musical quality it`s mostly their curious sense of humor that distinguishes the band. Named after a tiny Hutzul-village in the Carpathian moun-tains, which is their musical Zion, they mix all kinds of music of the Ukrainian regions with Punk and Ska-elements to a energetic Hutzul-Ethno-Ska that is not only extremely danceable but also comes with beautiful melodies. It`s their freaky show, the charismatic singer and their joy of playing what fascinates the audience even at extended two and a half hours gigs. Moreover the band is always full of nonsense, so spontaneous unplugged sessions at all imaginable places are one of their peculiarities.


Perklaba started their career 1998 in Ivano-Frankivsk (west Ukraine) and at first played in local underground clubs Ska-Punk with slight Roots-Reggae influences. Later the band turned more towards their roots - Hutzul-music - and so they set out to conquer the world... Initially they toured across the Ukraine and then played several gigs in Poland,Russia,Germany,Austria,Switherlan,Holland. They were finally discovered on the "Rock Existenzia Festival" in Kiev were the amazed audience realized that they were facing a true gem, that was fooling around with the audience. At the "orange revolution" Perkalaba were also a mainspring and the band was facing their new future. Nowadays everybody in the Ukraine, Poland and on Folk-Rock festivals all over the world knows the band Perkalaba. Who hadn`t got the opportunity yet to see them live, should, as we recommend warmly, use the very next chance to give them his best attention and to lend them all available ears, especially who is in fond of freaky humor and high quality impellent music. They have a superior musical quality and the impulse not to do things by halves in common with many Ukrainian bands. That enables Perkalaba as eyewitnesses report to shake up those who normaly aren`t not very fond of this kind of music. That again speaks for itself. Concerning this music, one can think of many attributes as "well roasted", "so yellow that looks black", "a flashing of dry salted knitting needles", "a quick green pressure", "a fragment of a joker in a looking glass". In other words Perkalaba impressively demonstrate the connection of genius and insanity and they stand for musical grenades as well as songs that might be called ballades in some way. They imposingly present this on their current album "Hovorit-Ivano-Frankivsk". After the success of Goran Bregovic, Boban Markovic Orchestar and the Non Smoking Orchestra of Emir Kusturica, Perkalaba is the Ukrainian answer, but actually more than that The music of Perkalaba is inspired by various ethnic music from around the world, especially from various regions of Ukraine, such as Hutzul, Bukovyna and Zakarpattya. Other influences include the punk music of the Pogues' Shane McGowan, Element of Crime and from reggae such bands and artists as Bob Marley, Manu Chao, Skatalites. Now Perkalaba plays in balkan beat style mixed with Gutzul roots. Perkalaba group, which is well known to everybody in Ukraine, Poland and elsewhere, who appear at all kinds of etno-rock related festivals. If you have not had an opportunity to see them yet, but you also are a fan of the Ukrainian etno-rock, I do recommend that you give them your ears and full attention. Especially if you like folk punk. As so many uUkrainian artists, their music is of high quality and they don't do things by halves. As many eyewitnesses say, even today this group is already able to rouse an audience of many thousands, and their music has spread like a wild-fire. Here there is energy without limit, and I know for sure that the group rouses even those who do not like such music very much, and this fact speaks for itself. One may use different epithets. Well roasted, so yellow that looks black, flashing of dry salted knitting needles, quick green pressure, a fragment of a joker in a looking glass. In other words, here both musical torpedoes and songs, which may be called ballads, are presented. Or you may not call them that, as there is no less restlessness at this disc than melody, and they do not lack beautiful melodies. I hope, it will be like that in future, because this first album of theirs is cheerful and bright news. 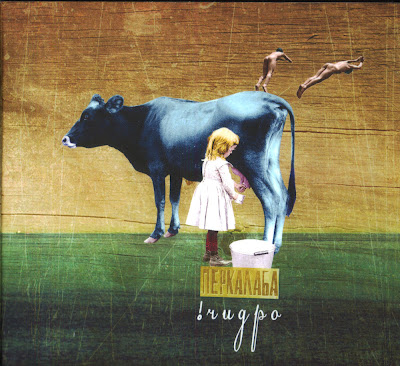